Note: I wrote this blog post back in November of 2011, before chia is as ubiquitous an ingredient as it is today. My amusement at the time seems, well, quaint today!

I saw this yesterday walking down the bread aisle yesterday and actually did laugh out loud. Other people smiled, but that was probably because of the crazy lady taking photos of bread with her cell phone. But look – what’s your first thought?

SNL’s Chia Head skit was the first time I’d ever heard of chia (ok, I didn’t watch a lot of TV in the ’80’s), and it was a few months before I understood that there really was a chia head, and chia pets, and it was a whole . . . thing. A thing I just snickered at.

Turns out, though, chia bread isn’t made from recycling your old chia Sponge Bob. Proud owners of Chia pets are having the last laugh. The seeds of the chia plant or salvia hispanica, are packed with protein, calcium, and antioxidants, stabilize blood sugar, cause no allergic reaction, and – wait, there’s more! – they contain HUGE amounts of omega-3 fatty acids. Imagine heart health without fish burps. Sprout the seeds, grind them for flour, mix with dried fruit for a crunchy trail mix – you name it, chia goes with everything. First flax, then hemp, now chia – chia is poised to become this year’s culinary equivalent of the new black.

I’m a closet ethnobotany nerd and know that chia isn’t a joke at all – it’s a quite fascinating plant. Native to Mexico and Central America, it was well-documented in both the Mendoza Codex and the Florentine Codex, texts created in the mid-16th century by Spanish explorers intent on recording the culture of a people of whom they, somewhat ironically, caused the demise.

Here’s a drawing of chia from the Florentine Codex: 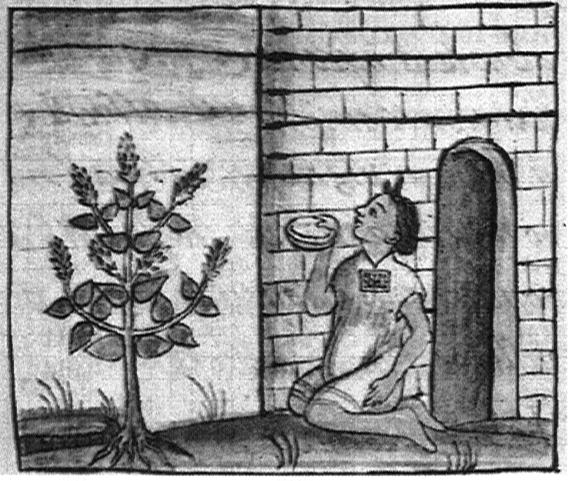 And a few fun chia facts:

Cortez ate it, loved it, and sent some on back to Spain to try and get chia-mania going. Sadly for our collective health, King Charles gave it a pass and we continued on the wheat flour path. But are you game? I found quite a few sources for consumable chia seed online; my bet is on Bob’s Red Mill brand. It’s pricey, but I buy their flaxseed meal, spelt, and semolina already and the quality is excellent. If you want to try and grow your own, this fantastic site called Sprout People tells you how.

So just for fun, here’s the original Chia Head commercial:

One last thought – chia might not be only the newest old superfood . . . chia head might also be the newest old look. Check out this photo of Flea sporting a nice green ‘do in the Red Hot Chili Peppers’ “Adventures of Rain Dance Maggie” video and see if you agree: