How do you manage kids and junk food?

I read this great article on Zite this morning: My Kid Likes Junk Food And That’s Ok by registered dietician, writer, and mom Sally Kuzemchak. She makes the point that, no matter how much a parent wants and tries to keep their child away from junk food, it enters their lives in some way. Yes. A child would have to be kept away from television, from movie previews, out of mainstream grocery stores, birthday parties, would have to ignore snacks other parents take to the park, and would probably have to stop engaging with other kids altogether, especially at lunch time, to remain blissfully unaware of junk food.

When Kid One started school, I was truly shocked when I saw what some of the kids brought for lunch. Bologna sandwiches, Lunchables, potato chips and cookies in all sorts of packaged-for-lunch-box shapes and sizes . . . nary a piece of fresh fruit in sight. Trash cans filled with barely-eaten sandwiches and empty foil wrappers. This was Santa Cruz, after all; I honestly went into his kindergarten thinking the kids who brought that stuff would be ridiculed. And it wasn’t just lunchtime – in any class, over half brought in treats to celebrate their birthdays. Not homemade goodies, either, like these oatmeal cookies with Craisins my dad Downtown Tom just whipped up and emailed to me:

Instead parents usually brought cupcakes from the Safeway bakery down the street: spongy yellow cakes piled with snow-white super-sweet frosting and season-appropriate sprinkles. Then there were the class parties: the random ice cream parties, pancake parties, the celebrations for Halloween, Thanksgiving, winter break, Valentine’s Day, and end of school. It turned out to be an average of 2-3 times per month each child was offered junk food not provided or sanctioned by the parents. And that’s not even including Kid Two’s sixth grade year when his teacher, a fast-talking, sweets-obsessed woman with ADHD, thought it completely appropriate to reward her students from a desk drawer stuffed with hard candy.

That’s a lot of junk food around.

Kuzemchak wonders how her readers manage junk food in our children’s lives. Full disclosure: when Kid One was four, he was a bit obsessed with the toys tucked into Burger King Kid’s Meals. Totally my fault. This was October of 1997, and they had released a Halloween-themed line of action figures – the Universal Monster Toys – Dracula, Frankenstein, and the Mummy. We found out that the various Burger Kings received stock on different days, and not always the same item. One week we went to the Capitola BK on Tuesday, then Scotts Valley on Thursday to see if we could score different creatures for his collection. It was completely ridiculous – I even knew that at the time. Although I do still wish I had those toys; I have some happy memories of Kid One and I sprawled out on the floor, making up stories with the Legos and Brio trains and action figures. 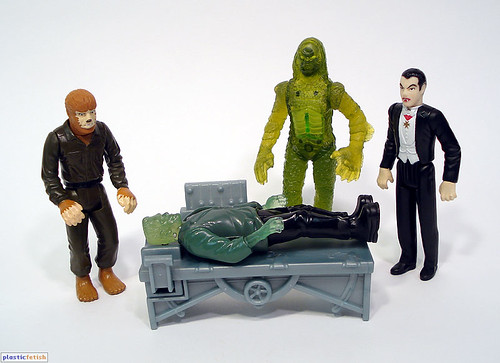 The upshot of that month, though, was that he got sick of Burger King and has basically refused to eat there ever since. Kind of like when he wanted to play with toy guns and we were against it, so instead of sticking with a firm no, one evening LL took him to Toys R Us and bought him every toy plastic gun in the place. He played with them for about three days.

Back to the question of how we manage junk food in our children’s lives: the truth is – my kids, now 13 and 20, have been managing it on their own for a long time – starting back when Kid One was 11 or so and asked me to stop giving him cookies in his lunch because he got too tired in the afternoons. I keep food in the house I want them to eat, and it’s normal to plow through a bag of baby carrots after school instead of chips. I didn’t really have to do anything except set the example through my own choices.

The Burger King forays were, strange as it seems now to admit, something I thought it would be fun to do. A treat – like the short-lived Sunday morning doughnuts. But in our family the treat – that cool, fun, out of the ordinary thing – has never been a doughnut or box of chicken fingers. Neither of them particularly likes that stuff, along with birthday cake and cupcakes. A real treat is surprising one of them with a carton of berries after school, or answering an unconditional “sure” to request to play a board game. It’s saying yes to something they love, not offering them something they don’t care about. So now I have two boys who love vegetables and beans, refuse to eat fast food, and have a healthy enjoyment of an occasional root beer. It wasn’t management as much as just paying attention

So how do you manage kids and junk food?