Palm trees beckon to Coronado even in the June Gloom.

I’d heard there was biking on Coronado. I took this as a personal challenge; there’s nothing more I love than than wandering down a new street or trail. There’s a thrill of discovery in experiencing a new piece of the world first-hand, the sounds and smells and weather, the secrets, all those things you’ll never find from a photo on Google Earth. So, while most vacationing families left the Marriott this particular June morning to check out Legoland or Sea World, I took the proverbial road less traveled, hustling Kid Two into a ferry across the bay to rent fat blue cruisers and take off into our unknown.

The path took us under Highway 75’s swath of blue steel toward our reward, Glorietta Boulevard, a wide, tranquil avenue smelling of eucalyptus and lined on one side with large, lovely homes gazing out over a golf course, a tennis club, the iconic Hotel Del Coronado, and Mad Men-esque towers of the Coronado Shores Condominiums.

Many of the homes along Glorietta Avenue are decorated with American flags.

Marilyn Monroe’s “Some Like It Hot” was filmed here at the Hotel Del Coronado.

My plan was to go as far as the trail took us, so instead of a quick loop around the island we turned south at the marina, red-turreted rooftops of the Hotel Del at our backs, to Strand Way. Here it’s a proper bike path smelling of plumeria and rosemary, lilies and lantana – all tidy mounds of shrubs lining a nicely groomed trail.

I’ve led the boys down a few sketchy paths in the past, though, so Kid Two was justifiably suspicious of my plan as the trail took us from plumeria paradise past a enormous, traffic- and construction-laden compound, as we discovered later, the Naval Amphibious Base. But there’s beauty in not knowing where you’re going or what to expect along the way. Just past the base, a sign welcomed us on the next part of the journey:

Discovery turned out to be the word for the day. We discovered a protected California least tern breeding ground, land set aside and guarded by the Navy. We jumped at the barrage of gunfire while studying the interpretative signs – artillery practice a hundred yards away did nothing to make Kid Two trust my judgement, especially after pedaling through a patch of acrid smoke. But we discovered other hidden spots carved out next to the trail:

A secret spot on the Silver Strand

We discovered Fiddler’s Cove Marina, where we stopped to fuel up with a Pepsi and a Doubleshot and updated LL on our whereabouts. I didn’t realize, until studying the map there, that Coronado Island is actually the blooming rose on the slender stalk of Strand Way, a thin, ten-mile peninsula stretching northward into the sea from Imperial City. And I didn’t know, until we were there, that this Silver Strand – aka the unromantic sounding Bayshore Bikeway – is a Place. Native American artifacts dating back 9,000 years have been discovered there, Navy SEALS train there, and migrating birds rest and eat there – Kid One actually surprised me later by knowing all about this land’s importance on the Pacific Flyway.

We continued along this trail, a flat, two-lane route that parallels the flat, two-lane highway, both roads sandwiched between white sand Pacific beaches and the mudflats of the San Diego Bay. 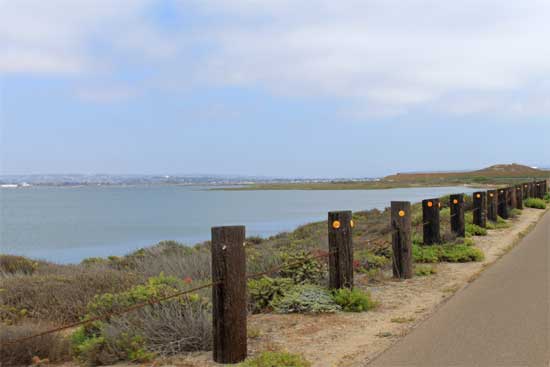 Then toward the end of the trail at Imperial City, we discovered the most amazing find, the trail’s crown jewel, the South Bay National Wildlife Refuge, a 4,000-acre egret and eel grass dotted mudflat, originally home to the native Kumeyaay people.

The biggest discovery, though, was how much the Silver Strand is a true study in contrasts. On our 20-mile round trip ride we saw barbed wire and mudflats. Statice and ice plant. Prickly cactus making its way up the coast mingling with coastal buckwheat making its way down. Tony resorts of the Strand facing off across the San Diego Bay with working factories of the mainland, sharing views of both migrating birds and container ships. The hulking grey naval military complex nurturing delicate white California least terns on a 75-acre watery bayside refuge while conducting oceanside artillery practice. 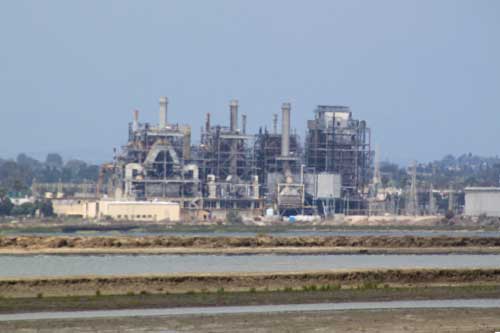 In the end, we counted a blue heron, a lizard, a few seagulls, several grey squirrels with white bellies scurrying in the sage scrub, brown songbirds with slender scarlet throats, a gaggle of Canadian geese flying in formation, a handful of least terns flitting and diving, and a dozen elementary-age children learning to sail on 16′ boats in Fiddler’s Cove. A hundred cars driving by. Heard the low drone of a half-dozen military helicopters headed to and from the naval base on North Coronado. Exchanged smiles with the handful of bikers and dog walkers we passed. Felt the offshore breeze in our faces in both directions, and watched the fog roll out to sea and back.

A perfect day of discovery.

But there’s more! Thirteen year old boys who take 20-mile bike rides need sustenance. Look what we found after we dropped off our bikes: 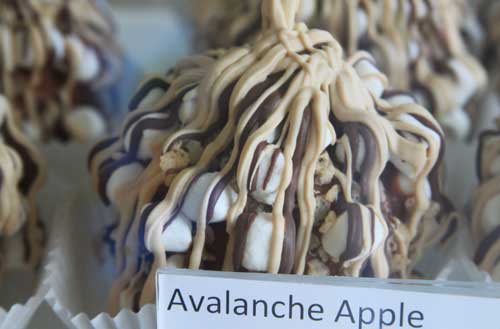 Caramel apples that are too gorgeous to eat – although he did. Tart, crunchy apple dipped in caramel, rolled in tiny marshmallows, then drizzled with chocolate and more caramel, from Sweet San Diego in Coronado’s Ferry Plaza. Kudos to the genius who came up with these.

Tired and full and all set for the ferry back to the hotel for dinner: 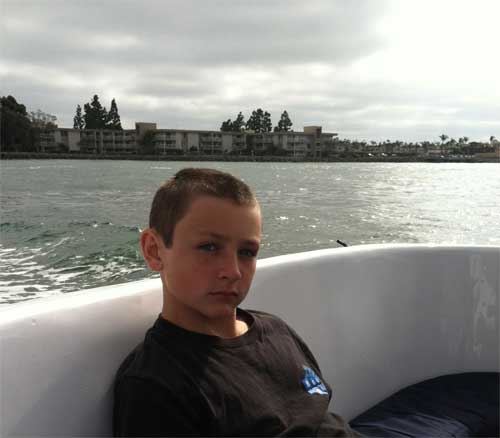