Can you print me out a burger, mom?

I am completely flabbergasted at this Jetsons-meets-Chickienobs notion that one day in the not-so-distant future we’ll most likely have the ability to push a button on a kitchen device and be delivered a steak or burger.

I’m talking about using a 3D printer to print out food, and for those of you who can’t quite wrap your brain around it watch this two-minute video that demonstrates how you can “build” some

There’s a very quirky, appealing aspect to this technology; think of taking cake batter, bread dough, masa – anything edible that can be squirted through a tube – and transforming it into a specialty shape. Cobbling together an cocoa sneaker from melted chocolate:

But there’s another aspect to 3D food printing – the idea of building food instead of reshaping it. Constructive printing instead of transformative. Imagine buying printer cartridges in hamburger or chicken flavors instead of red, green, and blue. Building a burger from bioinks for human consumption.

Constructive printing does exist; it’s used experimentally in regenerative medicine. Space age Viktor Frankensteins don’t have to go and rob graves by the light of the moon any longer, they can just click here to purchase a 3D bioprinter and bioinks to whip up some skin and bone tissue. The appeal in medicine, of course, is to heal patients more quickly and efficiently. I like this summary of the process from artist Perrin Ireland: 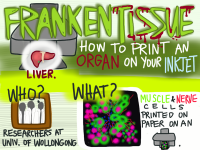 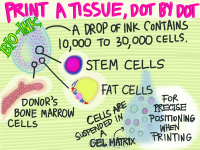 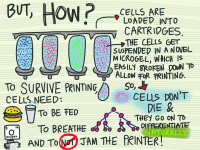 Take that idea one step further. There’s a wonderfully aptly-named company Modern Meadow that aims to let us have our cows and eat them too . . . by bioprinting raw meat. It’s the ultimate in humane beef, when you think about it; the animal doesn’t die for our meal. But the mind boggles with questions raised by this technology. If the stem cells for your burger came from cows that were grass-fed and organically raised, is your GMO meat then considered to be organic? If the animal is not killed for its meat, then is it vegan? Or is the whole thing a moot point because it’s GMO? Does sustainability trump genetic engineering concerns? I really just don’t know.

Here is Dr. Gabor Forgacs, the man behind Modern Meadows’ manufactured meat, talking about the benefits of bioprinted meat. Oh, and he eats some, too.

There are arguments to be made for laboratory-grown steaks. Michael Spector addresses them in this excellent New Yorker piece. As a culture, we have a voracious appetite for steaks and burgers, but raising cattle for consumption is outrageously hard on the planet. For example, it takes approximately as much water to grow a pound of beef as a single-family home of 4 uses in one week. Can you even imagine? Cattle are are also responsible for a tremendous amount of greenhouse gas emissions; globally, about a quarter of all human-activity-related methane comes from cows. (Other human-related sources are landfills, coal mining, and natural gas/petroleum systems.) Then there are CAFOs, or factory farms, cramped, polluting, horrifying prisons designed to treat animals as machines to feed our appetite for cheap meat. I’m certain all the energy and money that goes into maintaining those operations would be better directed in some more humane, sustainable operation. And then consider world hunger. This technology would certainly have an application; high-quality protein that doesn’t spoil? It certainly wouldn’t spoil, would it?

If this technology ever gets off the ground and people can accept that bioprinted meat is both ethical and sustainable, there’s still a perception problem to overcome. I love this Farley Katz cartoon from that New Yorker piece:

I was talking to Kid Two about this as we were walking Pup, and instead of being put off by the idea, he first asked if PETA was on to this. Then he pointed out that you could make specialty flavors and enhance the meat with fiber. THAT’s my boy.

So what do you think? Would you give humane, sustainable beef a chance? Or does the whole idea make you want to just go and bury your head in a big bowl of lentils and rice?

You may want to read Margaret Atwood’s Oryx and Crake to contemplate again whether life imitates art or vice versa.