True story: St. Louis-born in a decidedly un-foodie time, I did not know that provel and provolone were two different cheeses until after I had moved to California and was married with a baby. Really. I had a sudden taste for one of those delicious house salads we used to get from Talayna’s back when there was only one enormous and dirty location in DeBaliviere, before it got all prettied up and moved. The salad was an enormous mound of iceberg lettuce with a few Greek olives, cherry tomatoes, croutons, and delicious gooey tubes of provel cheese, all tossed together with the house dressing, a garlicky creamy Italian that my BFF assured me her mother said was very close to Marie’s.

I can’t find a picture of it, but here’s a similar salad from Leo’s Pizza in Kansas City that will give you the idea: 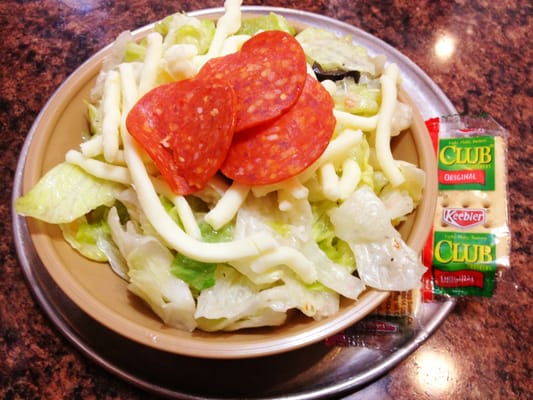 I made the salad that night with provolone and was disappointed. Where was that soft, gooey cheese I craved? I confessed to LL being confused that the provolone in California was so – different from my midwestern cheese.

“But we called it provel,” I reasoned. “Maybe there’s some difference.” And that’s when I learned they’re two completely different cheeses.

“Provel is like Velveeta,” he informed me. It’s processed. It’s not even cheese. I’ve never seen it around here.” To this day, I have no idea how my native California-husband knew about provel 22 years ago when just 2 years ago even Anthony Bourdain hadn’t. He just knows things, it’s his superpower.

So I moved on and found other cheeses, and for all these years provel was just something I have once a year when I manage to sneak in an Imo’s pizza on visits to my family. Then this past spring I found this nice piece in CNN’s Eatocracy called Hungry for Home: Provel cheese with an actual recipe for homemade provel.

You know I had to make it. I was suspicious of the added liquid smoke, though. This could be the make-it-or-break-it ingredient. I bought this Lazy Kettle brand Hickory Liquid Smoke that claims to be all natural with no artificial flavors, colors, or preservatives. It smells very strong, and so I used only 4 drops instead of the full teaspoon the recipe calls for. Then I melted the cheeses together, chilled, and grated it again just because I’m sometimes ridiculous.

I made the cheese, and it was good. I knew it was good because I hadn’t told anyone what I made, and Kid One, a yearly Imo’s Pizza veteran, took a big bite of a provel-and-mozzarella topped pizza with bacon, sliced tomatoes, and garden greens. He face turned thoughtful, he took another bite and chewed more slowly, then asked, “What is this? It tastes familiar.” Yes. I love it that my son and I share childhood food memories from different places in time.

Provel, as it turns out, makes excellent ingredient in mac and cheese, topped with Italian-style breadcrumbs and crispy prosciutto. It’s now a Kid Two favorite.