A world of food in one city

On the recent occasion of my first-ever evening in London: I walked down a street named for the patron saint of travelers. Walked past Lebanese, Chinese, Mexican, and Turkish restaurants, past sushi and tapas and burgers, before eating French and Italian food served by a Spanish woman named Melina.

I thought I’d gotten around a bit for a girl raised in the heartland. Alaska and Hawaii, Canada and Mexico, France and Italy. I thought I understood “diversity.” But London! London is in a class of its own. London showed me what “multicultural” really looks like. People-watching in line at Customs: a tall imposing man with perfect posture in a white dishdasha and kufi standing alone. A Pakistani woman in orange and red-patterned sari with four playful brown-eyed boys in dress pants and blazers fidgeting at her hip. An Austrian grandmother playing rhyming foot games with a blond toddler while his parents murmured between themselves. Denim and backpack-toting students arriving in London for the fall term. One of them was a slender young woman with long, auburn hair and oversized red glasses wearing a matryoshka-emblazoned T-shirt proclaiming “Russian Doll.” Walking in Piccadilly: I met a Scottish man selling vintage embossing dies his grandfather had designed in Edinburgh and chatted with the Polish barista who made my cappuccino at Costa. (Unbelievably, I saw my Russian Doll bright red hair and a fresh bob hunched over her smart phone next to a bus stop. I didn’t say hello.) On a crowded Saturday afternoon on Regent Street, it appeared that every ethnicity, accent, and style of dress in the world was represented in equal measure. It was pretty fabulous. After sharing all this with my friend novelist Laura Benedict, she found this map that uses a passport motif to illustrate just how diverse London really is: 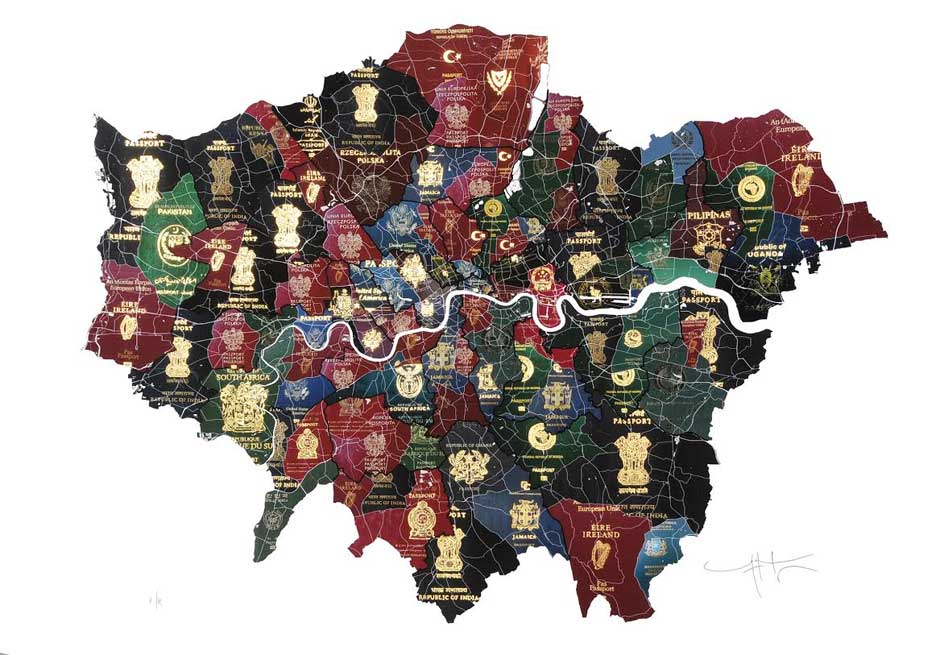 A fabulous array of restaurants naturally follows all this diversity.

But when you get right down to it, it was the humble the bacon butty that defined London Food for me. It’s the one thing I did every day: helping myself to strong black tea and a biscuit in my room, then heading out to explore the city, stopping somewhere for a version of salty pork on bread to kick off the rest of the day. To be honest, it was tough to get back to granola and yogurt at home after a few of these: